As always this was a massively enjoyable outing, greatly attributable to the highly-tuned administrative skills of our shy and quiet Vice–President, Jock Fraser, to whom we owe a big debt of thanks.

Early arrivals, Watts, Prior, Pickerill & Hills enjoyed lunch on Thursday at Luffness restrained a little by the draconian drink/drive laws in force north of the border; and then proceeded to engage in a tremendous match which Watts and Hills won with the very last putt.

Eight members then forgathered for dinner in the Old Clubhouse in Gullane, the early arrivals being joined by Fraser, Mason, Jones and Clynick. Heavy investment having been made in the Gullane taxi service earlier restraints were foregone and a very genial evening ensued, with a record-breaking bill for wine (£20 per head up on 2015).

Friday dawned wet and became wetter as we battled with our old friends, the members of Luffness, in our annual match. If the weather was damp, the golf and the competition was not and the match was halved, a highlight being the game-halving 5 iron hit by the ever self-effacing Vice-President which finished under a foot from the flag on the 18th.  His happiness was hard to disguise.

This was followed by a very convivial lunch with the home team, which was enjoyed to the full with torrential rain falling outside. The effect of this was that the formal proceedings for our Scottish prizes were suspended until Saturday. Nonetheless six brave (or mad) men (Bach, Clynick, Fraser, Irwin, Jones & Watts) played 3-ball sixsome, which, it is understood, was won in style by the Hon Secretary (Watts) and Irwin.

Enormous thanks are due to Luffness who are the most hospitable and friendly hosts. Luffness is an exceptional club with a great golf course.

Dinner (unrestrained, of course) proceeded in the Open Arms at Dirleton although the absence of Richard Lloyd (the curator of the text) precluded the usual singing of the Floreat. It would have been pointless anyway because we were in a private dining room with nobody else to disturb.

This brought us to Saturday – when summer arrived. Muirfield was under-populated and devoid of wind – perfection for the likes of us. Two rounds of foursomes were played, fast and competently, by the assembled company. Senior ORGS members have little difficulty with the second shot to the 12th; in the morning Jones hit his to within an inch or two and in the afternoon Mason holed his.

A variety of competitions took place. The Howard Thompson Plate was won by Mason, which will (happily) ensure that he has to return next year to defend it; the Coborn Osborn Cup (age & handicap) was won by John Bach and the (new) holes-up match play competition was won by Harry Turcan. Various people may or may not have been runners-up but the ORGS is not about statistics or records.   The match between the Vice President’s selected team and the Captain’s selected team was won by the V-P’s team, because the Captain’s team was utterly out-lunched, having finished the morning round with an overwhelming lead. How are the mighty fallen.  Team Vice-President therefore won the inaugural Captain’s Privilege, even though the Captain had left the salver (unpolished) in the car park.

We are extremely fortunate to be able to play this meeting on two of the very finest courses in the world. The whole weekend was testimony to why the ORGS is a very special society, which provides not only the highest quality of golf but also undiluted fun.

In the meantime, we look forward to a big turnout for the Autumn Meeting at Rye. 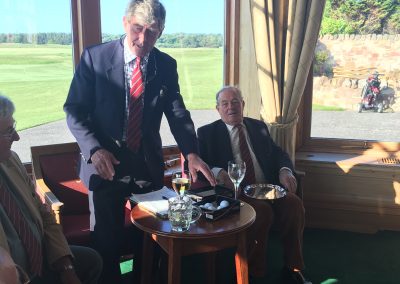 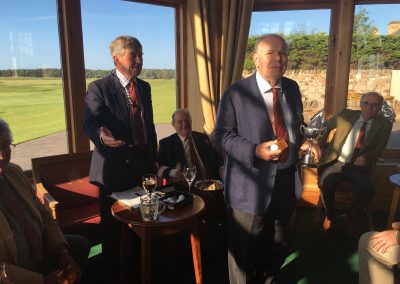 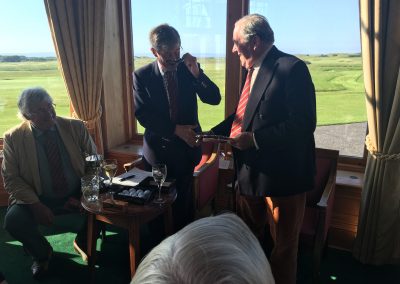 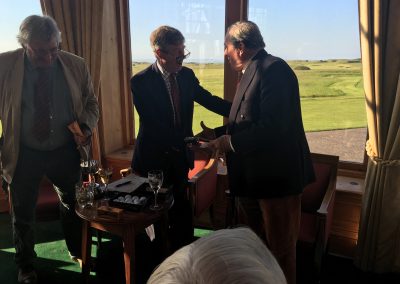 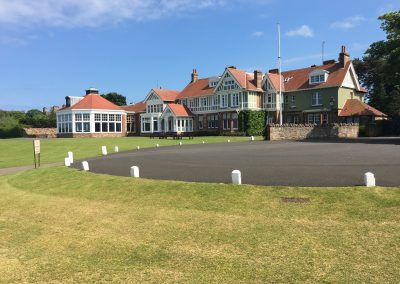 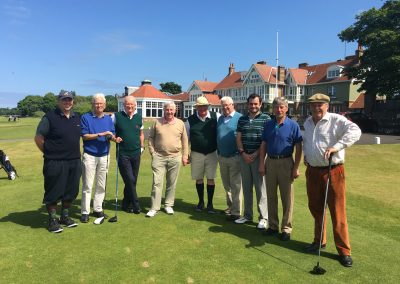 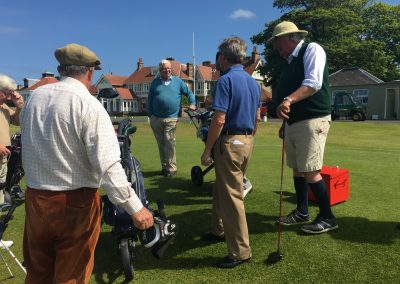 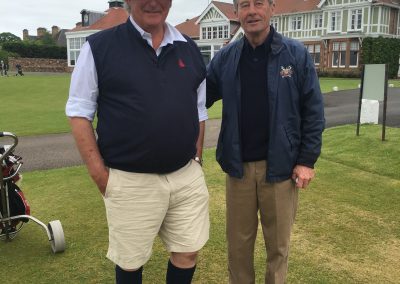 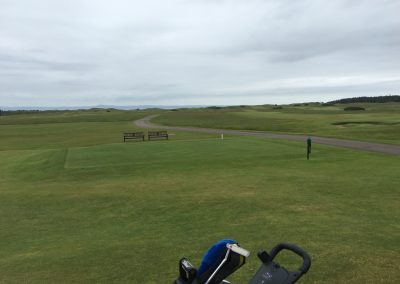 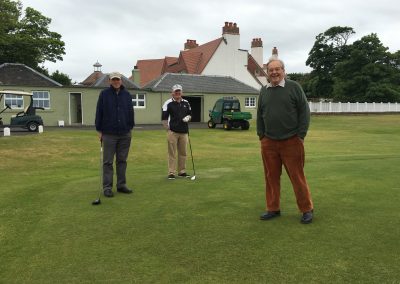 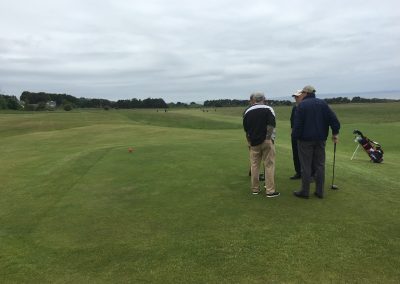 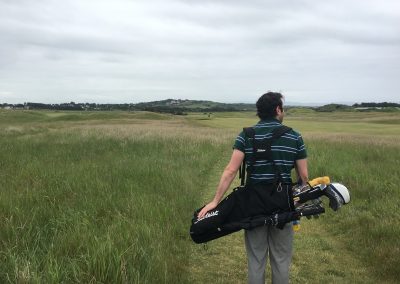 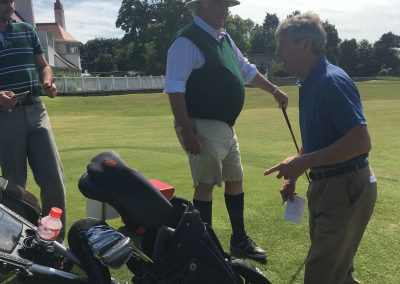 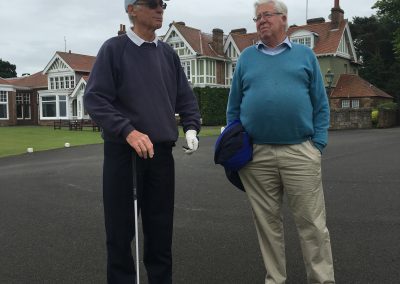 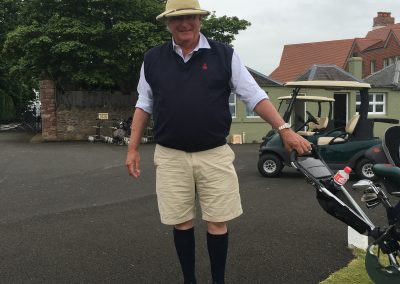 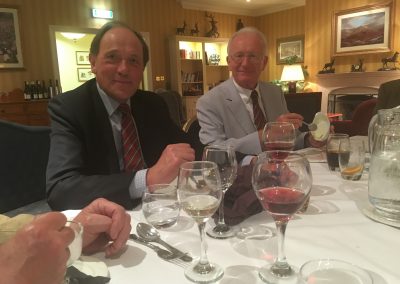 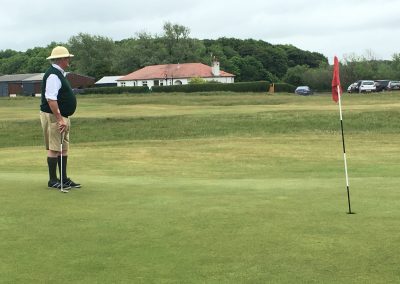 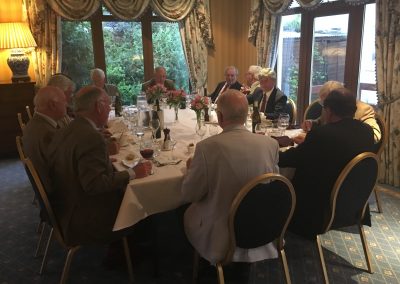